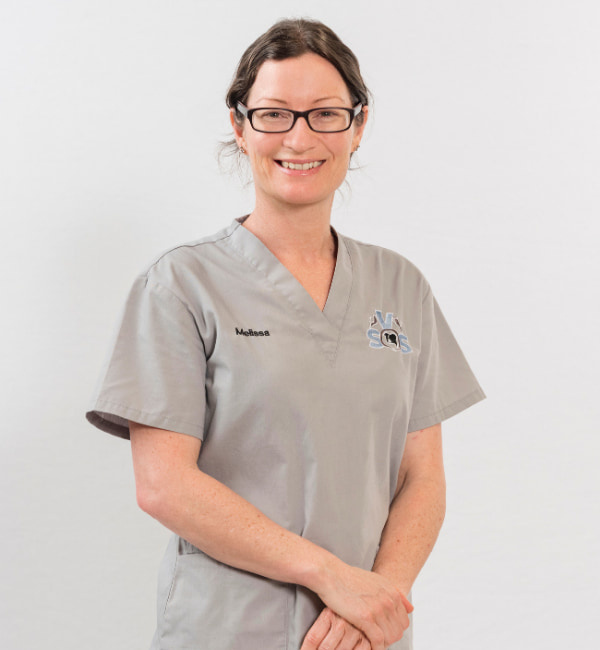 Despite wanting to be a vet since she was eight years old, Melissa initially pursued a career in graphic design. But the call to nursing was too strong and she ultimately retrained, completing her Certificate IV in Vet Nursing.

After completing her qualification, Melissa spent the next 15 years working in a mix of roles across both general and specialist practice and also spent some time in emergency. She has a strong interest in anaesthesia and animal behaviour, so the opportunity at VSOS was too good to pass up.

“At the time I was looking for an anaesthesia nurse role. The more I looked into VSOS, the more I got a really good impression of the team. I spoke to Tabitha Levien about the role, the practice and where they were heading and it really sparked my interest.”

Melissa treats her patients as if they were her own pets. She values that everyone at VSOS shares the same philosophy and she can work in such a professional environment with a highly-skilled team.

Continuing education is really important to Melissa, so she is always learning. A lot of her learning is around her special interest in anaesthesia and she also has a certificate in stress free pets.

“I’m always willing to learn new things and I often participate in continuing education so I can keep my expertise up to date.”

Melissa is original from New Zealand but moved to Australia to pursue better opportunities as a vet nurse. She has a Cattle Dog x German Shepherd called Maverick who she loves to spend time with outside of work. She also enjoys photography, graphic design and getting outdoors.

Meet the rest of the VSOS team